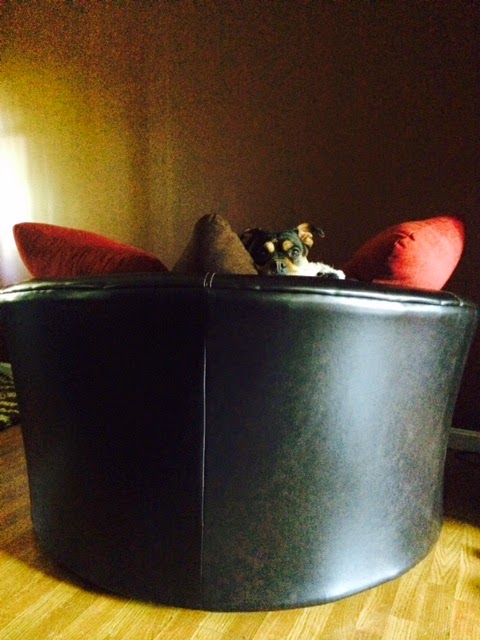 Gemma in "her" swivel chair in the Living Room

Meet Gemma Madeline, also known as The Princess. And just so you know, the "G" in her name is pronounced like a "J" like the way you pronounce "gemstone." You will not believe how many people pronounce the "G" with a "Guh" sound. People are freaking weird. Anyway she is a little over 3 1/2 years old, her birthday (estimated birthday) is January 21, 2011, and she is an English Bulldog/ Beagle mix, also known as a Beabull. She is my first rescue dog, first mix breed, and first dog that I didn't get as a puppy. I adopted her when she was 1 1/2 years old. I don't know a whole lot about her past other than she had lived in an apartment with a white furry small breed dog who used to annoy her and was mean to her, her owners got evicted, her owners abused her, and she had been in two different animal shelters. She was also heartworm positive (the shelter's cheap tests didn't pick this up) but we took care of that and she is heartworm free!

At the time, I had been looking at dogs online at shelters and rescues for months and months and months. I wanted to make sure I got the right dog and I wanted to rescue (I've had dogs my whole life and have always been puppies from breeders). One night, I looked at the clock and saw that it was time for bed but something told me to just look at this one last site again. So I did and then I found her. This gorgeous wrinkly faced underweight beauty. The next morning when I got to work, I immediately filled out the adoption application and emailed it to her adoption counselor along with an extremely long email. Her counselor emailed me back and we set up an appointment for me to meet her that Sunday. That Sunday, I found my angel and she found me. It was fate. They approved me and I took her home the following Saturday (August 4, 2012). At 1 1/2 years old, she weighed just 25 lbs (she weighs between 52 and 56 lbs now and is not overweight) and curled up in my lap somehow on the long drive home (1 1/2- 2 1/2 hour drive).

Despite her tragic past, she has definitely gotten used to being spoiled and she is definitely a Mommy's Girl. I absolutely adore her! Don't be fooled by her tough girl looks, she loves dressing up. She gets so excited to wear clothes and she will bring them to me and help me put them on her. She is most definitely a people dog, meaning she loves people more than dogs but she gets a long great with her little brother and little sister. She does have a lot of dog anxiety with dogs she doesn't know, dogs who obnoxiously bark, dogs who run at her, and she gets super nervous around small dogs when they are on the ground. I have tried many different products and training methods in an attempt to get rid of her dog anxiety in these situations. It has improved but I think she might just always be like this, however, I will never give up on her! 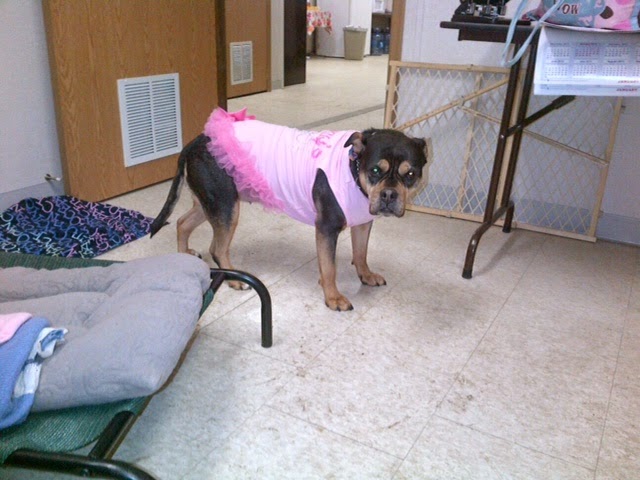 Until we moved into my new house this year, Gemma had only lived in apartments (I had apartments before we moved) and had never had a back yard. I'm telling you, having a yard (fenced in of course- 6' tall privacy fence) has enlightened her spirit even more so than the day I first brought her home. Another great thing about my house is that I made the basement into the doggy playroom. The floor has this concrete type paint and they have a couch, t.v., toys, water bowl, toy box, rug, blankets, dog beds, etc. As for the color scheme, I went with white, brown, coral, and a cobalt blue. Although I haven't finished decorating it, here is one of the decals I have on one of the plain white walls: 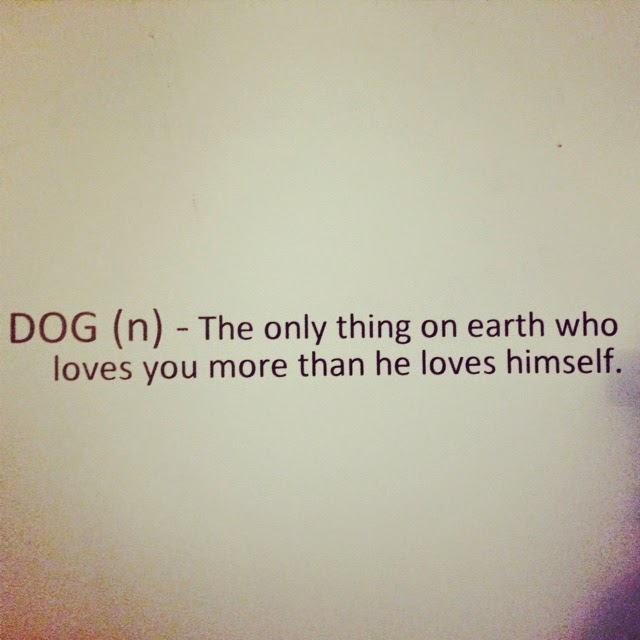 This girl is truly my angel. She has been with me through my good days and bad days and has stuck by my side with me being chronically ill and going to all of these different doctors. As I had mentioned in a previous post, I swear she can tell when I need to rest and take it easy and she can tell when I need to get my ass up and move around. She'll snuggle with me when I need to rest and relax and she'll lick my face to wake me up when I've layed down for too long. It is difficult to explain but she just knows. And when my back is really hurting, we'll lay back to back and her back acts as my heating pad.

I love Gemma more than anything in the world and don't know what I would do without her.