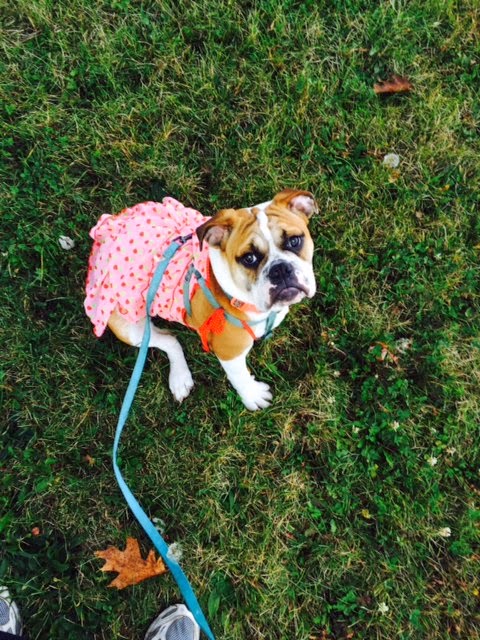 Audrey in her summer dress on a walk Sunday evening

Meet Audrey Georgina, also known as Roley Poley. She is over 6 months old, her birthday is March 26, 2014, and she is a purebred English Bulldog. This little wiggle butt came into my life not even 3 months ago. I originally had her middle name as Brielle but changed it because she acts very similar to my Mom's English Bulldog, George and she now goes over there while I'm at work to play with her Uncle Georgie all day. So Georgina is one of the female versions of George and I think it just fits. You all must think I'm crazy for getting a third dog lol. I grew up always having multiple dogs and animals in the house. And I would consider myself a very responsible dog owner. Dogs can be very therapeutic and my three really help me. Don't worry, I am definitely not looking for a fourth dog lol. 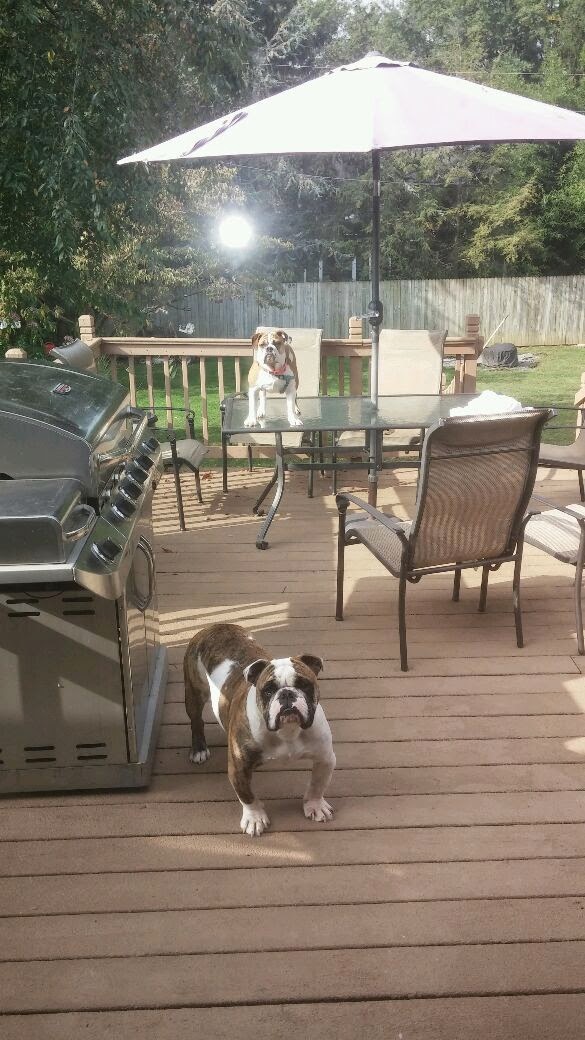 Uncle Georgie teaching Audrey to get on the table

Let's get back to Miss Audrey. I was kind of looking for a third dog and kind of not. I found Audrey on a puppy website that breeders can list their dogs. She was just over 4 months old and so chubby and wrinkly and an English Bulldog (my favorite breed), so I couldn't resist. I called and left a message and received a call back to schedule me to meet Audrey the next morning. When I drove up to the place, I realized the breeders were Amish. There were 2-3 barns and two German Shepherds (one pregnant) that seemed to be guarding the barn in the front. The man asked me to wait by the porch at the front of the house and he brought out Audrey who they had named Betty. She was the only one left out of her litter because they had originally planned on keeping her. I didn't ask why they decided not to keep her in the end because I was so in love with this skittish puppy and I know that a lot of the Amish, especially this family, are private about their lives. I can't say for sure, but I think this was a puppy mill, or at least a small one. But either way, I took this little girl home with me on August 2, 2014 (364 days after I adopted Mowgli).

Even at the breeder's house, she was very skittish. She still is skittish, mainly around loud noises, big things like the outside trash can, and men. She is very scared around men but has gotten warmed up to a few. She had no muscle and couldn't go on walks. She did not know how to use stairs and the pads on the bottom of her front feet are a little deformed. They aren't symmetrical and there is extra tissue. I started giving her joint supplements and still do. She has made so much progress. She uses stairs, can jump, and is now able to go on walks and enjoys them. 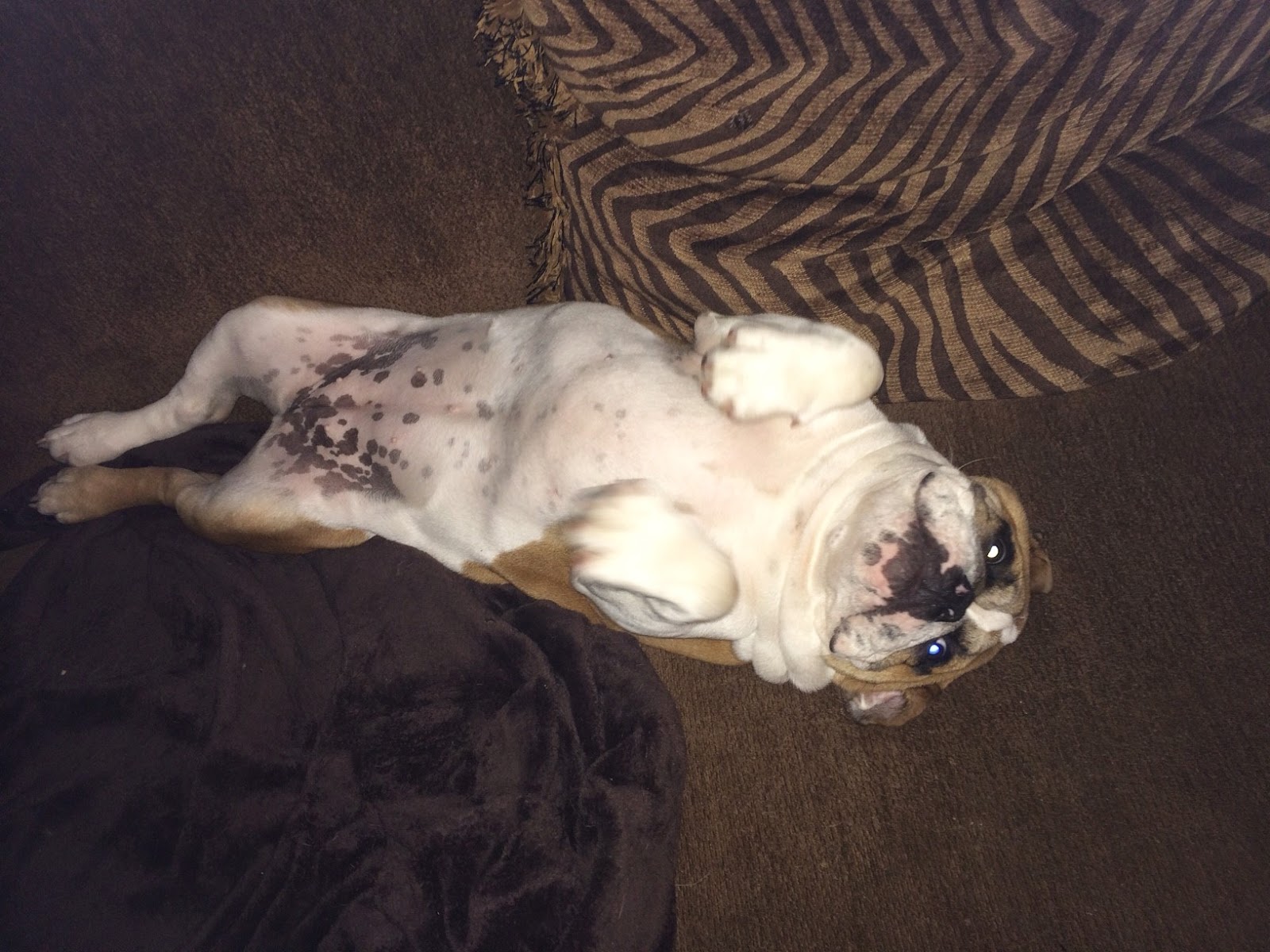 My favorite picture of this little roley poley

House training was and still is a pain in the butt. It is pretty obvious she was kept in a crate or pen like 24/7 or close to 24/7. And she does not whine or anything when she has to go potty. At night, she would just poop and pee all in her crate whenever she had to go and I'd wake up to a puppy COVERED in pee and poop and she acted like it was normal. She is learning to go to the door when she has to go potty and now she sleeps in my bed at night with the other two furrkids and holds it all night long. Having Gemma and Mowgli were a huge aide in teaching Audrey how to be a dog/ puppy and house training. Watching them and clinging to Gemma was the most successful thing that helped her learn to go potty outside, trust people, and just play and act like a dog. This process reminds me of the show Breaking Amish because she was raised in the Amish culture for the first 4 months of her life and it is like she is learning the English way/ culture of living lol.

Now Audrey is a spunky, cuddly, ornery (I like to spell it awnry but that is incorrect according to the dictionary), chubby, wrinkly, smushed face, adorable, silly English Bulldog puppy and fits in perfectly with me little family. 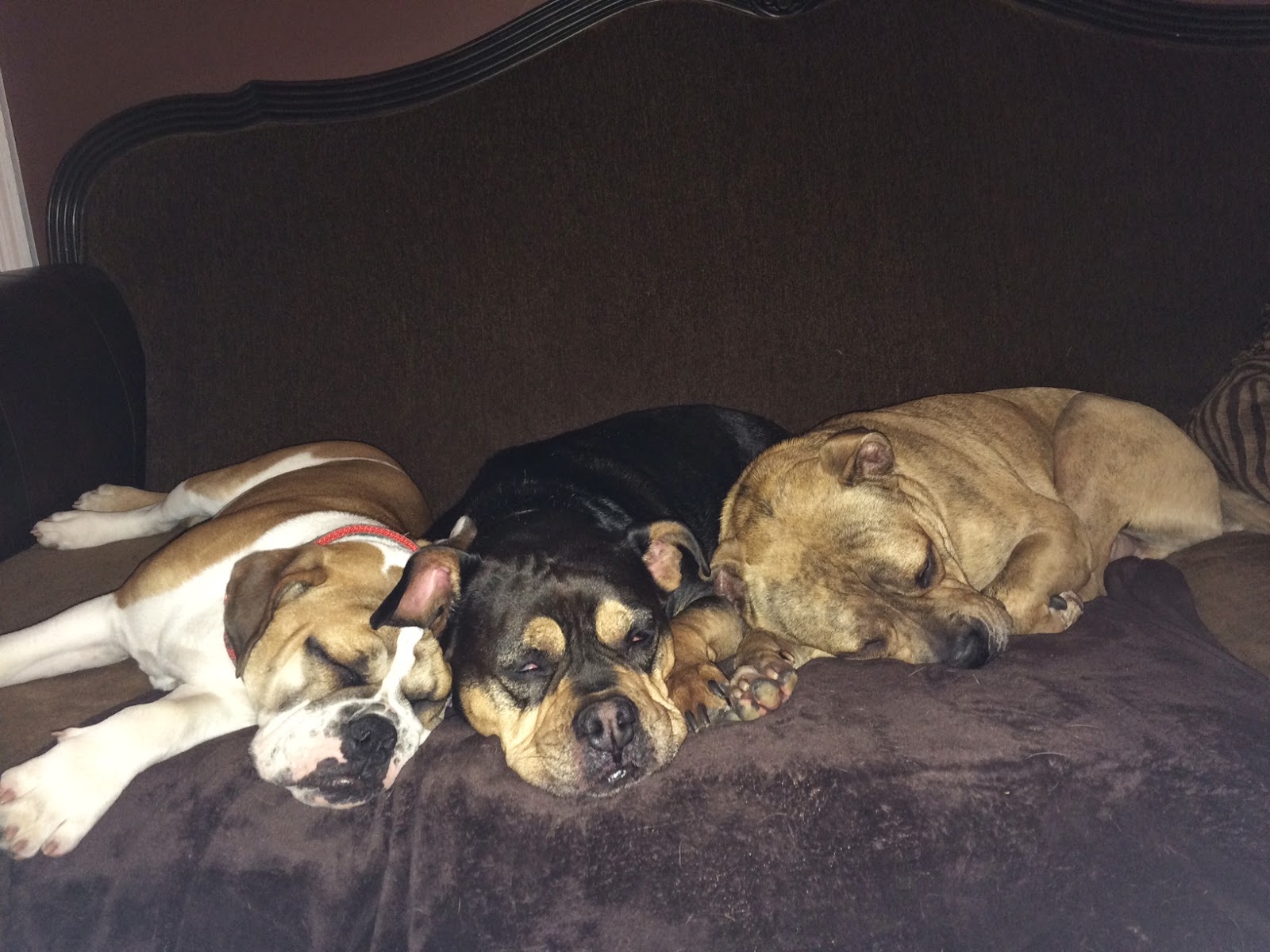