November 14, 2014
Yes, it is Friday!!! Thank the Lord! Hallelujah! It is so freakin' cold. It even snowed a little yesterday. I don't know about where you guys are but here, the lowest temperatures have been on the weekends. WTF? Mother Nature, you're doing shit ass backwards.

I just wanted to share a little something with you all that I found in one of my emails from Keep.com that I like and think is really cute. They are for men but fuck it, who says women can't wear men's socks? Shark socks!

So I have had part of this post (not the part I just typed) for a while and just haven't gotten around to finishing it.

Today's topic: Dog Clothes. A lot of people either laugh at me or criticize me for putting clothes on my dogs. They think it is stupid or cruel. It is not cruel. Get real people. I have lived with dogs my whole entire life. In the beginning we had labs and our labs had thick coats and we had a fenced in yard. When we started getting bulldogs and mastiffs, we started occasionally putting clothes on some of them. I DO NOT and WILL NOT put clothes on my dogs if they don't like it. The only time I would try to make a dog wear clothes that doesn't like it is if it is in freezing below zero degree temperatures and they have a thin coat/ get cold easily/ are sick or something.

Whether a dog is 5 pounds or 200 pounds, some dogs just need to wear clothing. Heck, my Bull Mastiff (R.I.P. Magdalena Starr) even wore a winter coat. I hear a lot of people say how back in the day centuries ago, dogs survived without clothes in harsh winter weather. News flash- back then, it was simply survival of the fittest. Some breeds of dogs didn't survive the harsh winter weather and some breeds of dogs did. Climate and the physical characteristics of dogs back then were completely different too. That was then and this is now. And the now is very different from back then. So people who talk about dogs and how they lived centuries ago are just plain dumb. It is irrelevant to this day and age.

All of my dogs that I have right now, Gemma, Mowgli, and Audrey like to wear clothes. So as their Mommy, I am going to do what makes them happy, even if that means putting clothes on them. Gemma LOVES it. She gets so excited. She will actually bring me her clothes and help me put them on her. I'm sure she wishes I would dress her up everyday. She also likes when I put scarves on her, but I only put my scarves on her for a short period of time and when she is right with me. Mowgli only wears clothes when it is cold out. He loves his Fall and Winter jackets and hoodies. The only other clothing he wears is his Birthday shirt that he wears on his Birthday and his Halloween costume. Audrey is a puppy and is new to all of this stuff. She will wear dresses but I don't put them on her too often. She has shown that she likes to wear hoodies, sweaters and coats when it is cold out but she isn't as prissy/ princessy as Gemma. 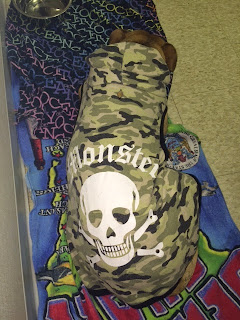 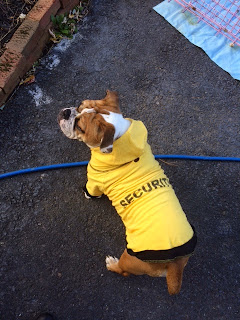 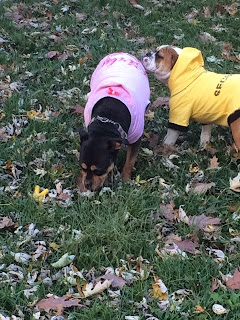 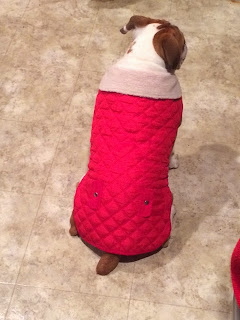 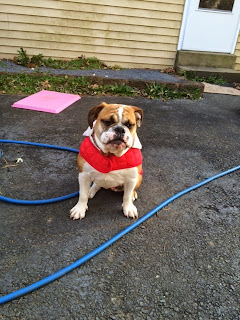 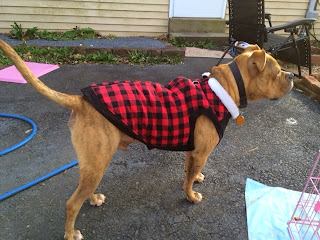 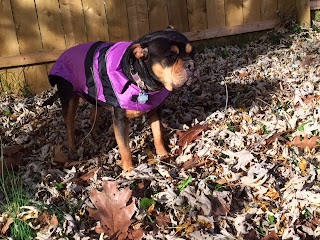 I first started buying lots of sweaters and coats when I got Gemma. Besides the fact that I noticed she liked wearing clothes, she seems to not have the strongest immune system (like me). Before I bought my house this year, I lived in apartments. So that meant that I had to walk her (and Mowgli when I got him). You need to make sure they have appropriate attire especially if you are walking your dogs. And when I say "appropriate attire," I mean, if it's fucking cold out and you have a winter coat, gloves, etc., then you need to put some piece of clothing on your dog to keep him or her warm too.

Because I had to walk my dogs, I also bought booties. I have a lot of booties because my dogs' front feet take a whole size up than their back feet. I've also lost a lot of their booties on walks or they have ripped. When it is below zero degrees and there is a foot of snow on the ground or something, it is a smart idea to put booties on your dog. Yes, they are a pain in the ass but deal with it. Last year, it was so cold that after standing in the snow to sniff and go potty for maybe a minute, my dogs' feet would go numb and they would pick up their paws and start crying. I was so scared they were going to get frostbite. So I kept their walks to a minimum and close to home. I also brought a towel with me for when their feet would get numb so that I could get any snow that was in between their pads out and to hold their paw wrapped in the towel to try to warm it up. If anything like this happens to your dog or you think they are getting frostbite on their paws- DO NOT rub their paws. I read that this makes it worse. So I just wrap the towel around their paw and hold it for a little bit.

Besides worrying about frostbite on their paws, my vet said that the most common place for a dog to get frostbite is on the tip of their ears. Hardly anyone puts hats on their dogs in the winter and if they do, the dog hats usually have holes for the ears to stick out, which doesn't help prevent this problem. So please pay special attention to your dog's ears as well.

To find out how dogs get frostbite, areas of the body they can get frostbite, the symptoms, and what to do, here are two sites that give you more information: here and here.

Please keep your pets warm this winter. And although state laws vary, PLEASE call 911 and report any pets that are being kept outside in the harsh cold weather and/ or snow. Ignoring this neglect is just as bad as neglecting the dog yourself.