Happy Howloween and a Birthday

November 03, 2014
Ugh... the dreaded Monday. Just reading that word on my screen is making me cringe. I feel extra tired and out of it today. But instead of complaining, let's get to my precious furr babies in their Howloween costumes! 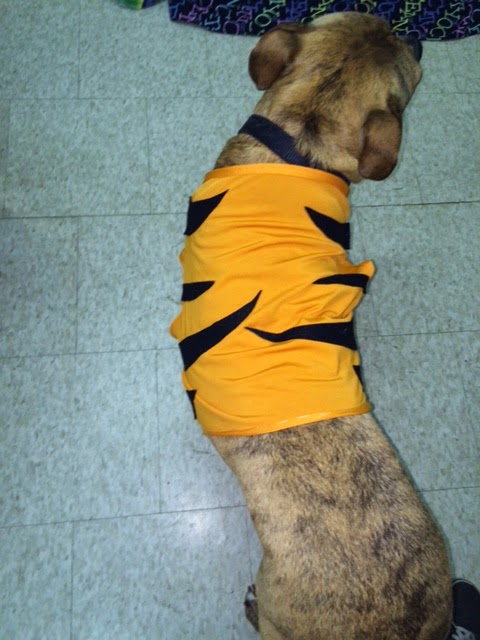 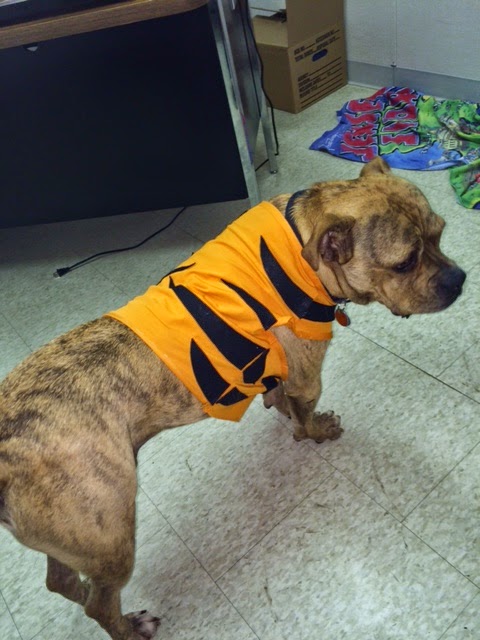 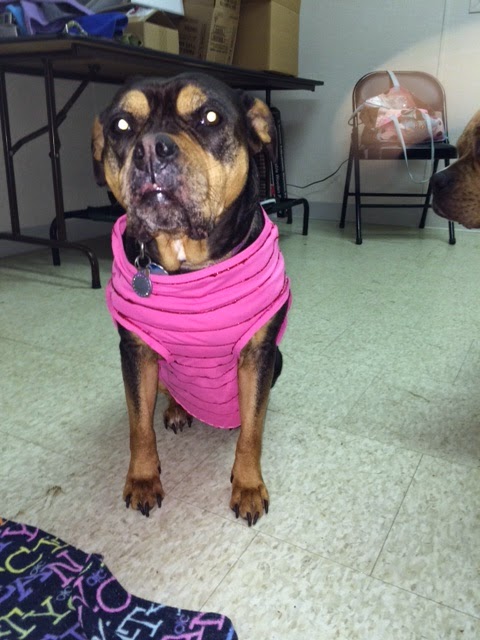 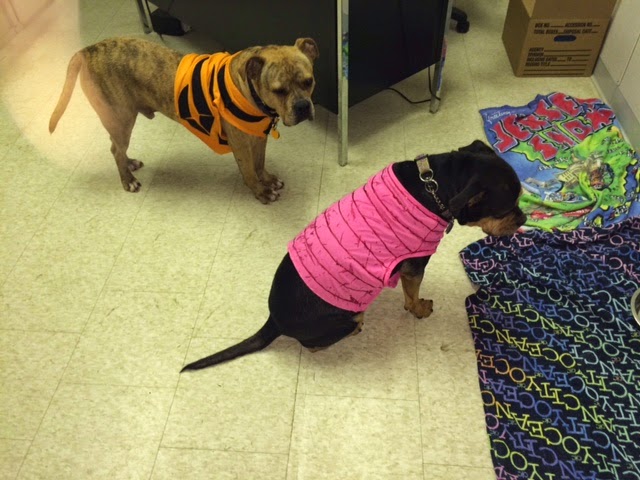 It was very early and while they were actually excited to be in their costumes, they did not want their pictures taken 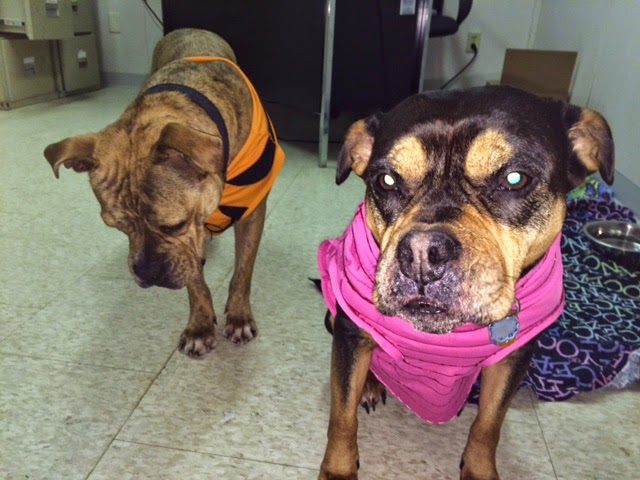 They are too cute! Who knows what the hell Mowgli is looking at considering there is nothing there and Gemma is giving a little half smile if you ask me 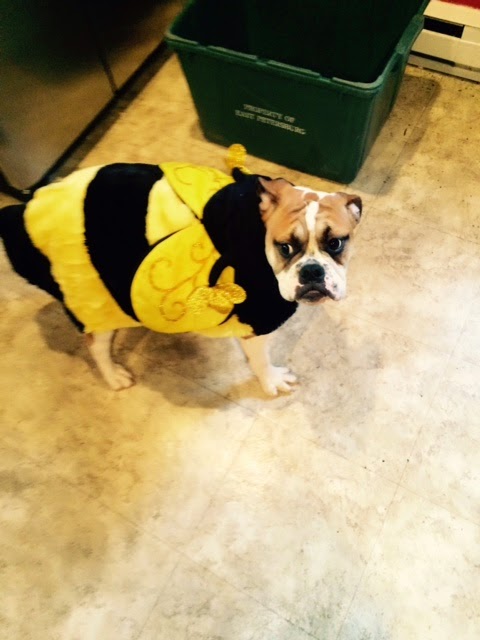 Audrey as a Bumblebee 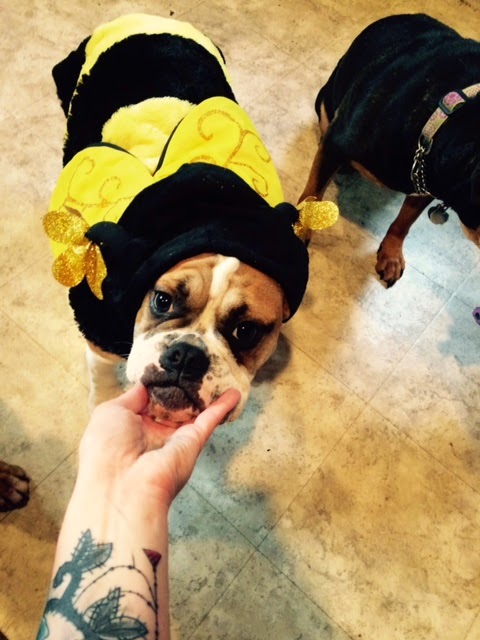 She wasn't too fond of putting the hood on 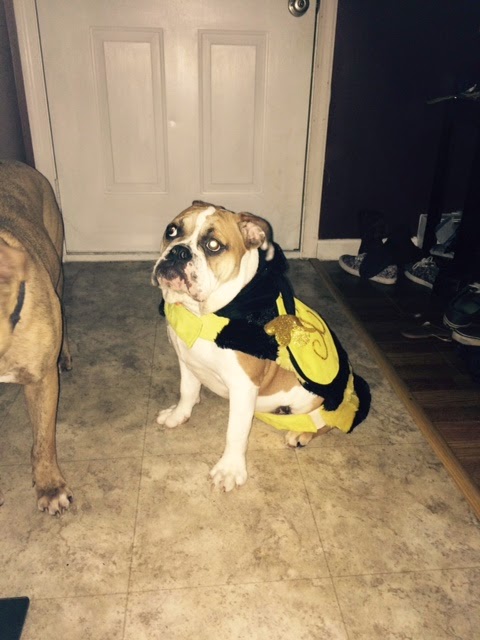 But she still makes a cute chubby bumblebee :)

So my dogs, my Sister's dogs, and my Mom's dogs went with a Winnie the Pooh theme. I'll be posting pictures of my Mom's and Sister's dogs' costumes this week and/ or next week. I handmade Mowgli and Gemma's costumes and bought Audrey's costume. She is one of the bees who tries to steal Pooh's honey. Audrey and Eleanor (one of my Sister's dogs) went as bumblebees because we had already came up with the theme and stuff before they came into our lives. They're the same age and growing, so we just decided to purchase theirs and make it easy.

I did go easy on the theme and costume making this year. It kind of makes me feel bad in a way because I took the easy way out and I can do so much better. However, I do procrastinate and I have been very fatigued. I overdid myself last year with making 6 Flintstones themed costumes completely by hand. So I needed a break and I need to accept that. I haven't decided on a theme for next year yet but I will keep you all posted. I am a planner and like to plan ahead, I just don't always start these planned projects as soon as I would like. I did get the stuff for their Christmas outfits this weekend though. I was very proud of myself for that. I ordered Mowgli a tie and I bought the materials to make Gemma and Audrey candy cane inspired tutus!

And something else happened this weekend besides Halloween... Mowgli's Birthday!!! My boy turned two and his Uncle Prince George (my Mom's bulldog- not in the picture) turned two too! They turned two on Saturday, November 1st. So here is the birthday boy in his birthday shirt: 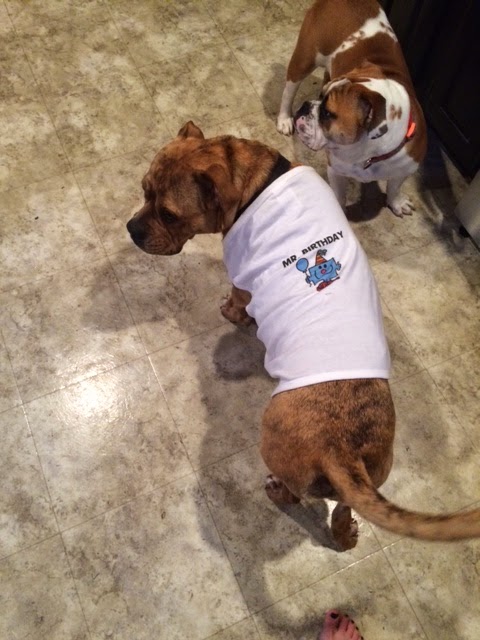 Mowgli in his shirt with Audrey photobombing 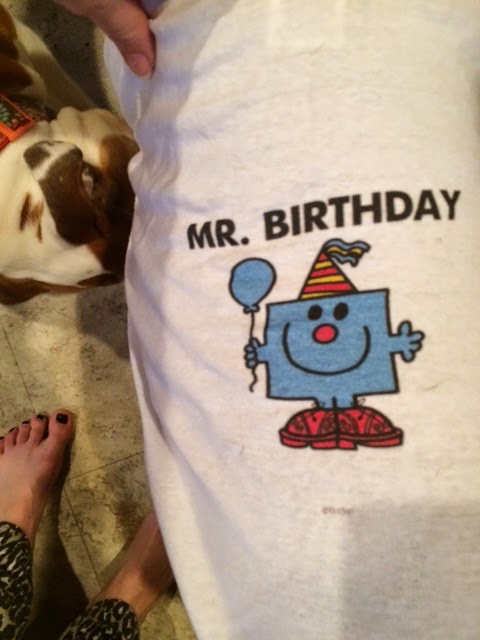 I hope you all had a fun and safe Halloween/ Howloween and enjoy my pictures!