November 11, 2014
Since I visited my Mom's this past weekend, I was also finally able to give her dogs their Halloween costumes I made. As you know, my dogs, my Sister's dogs, and my Mom's dogs went with a Winnie the Pooh theme. 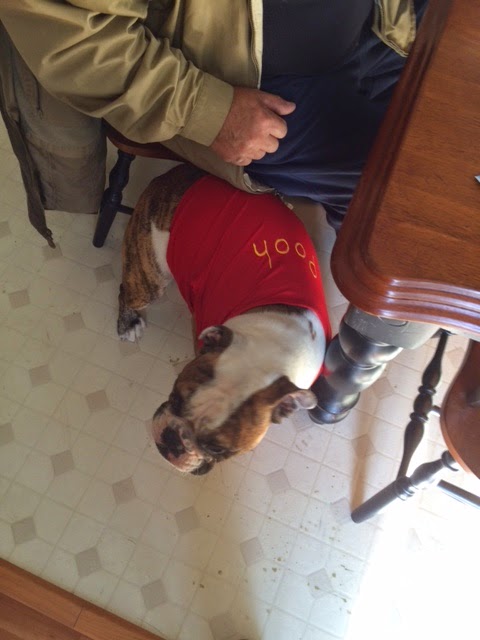 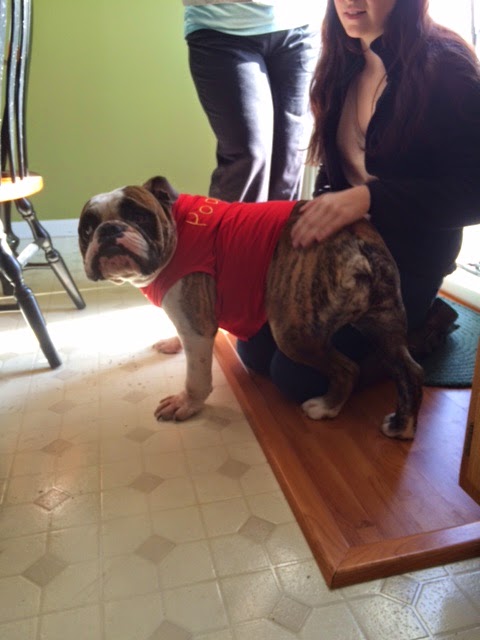 Prince George wearing the costume I made 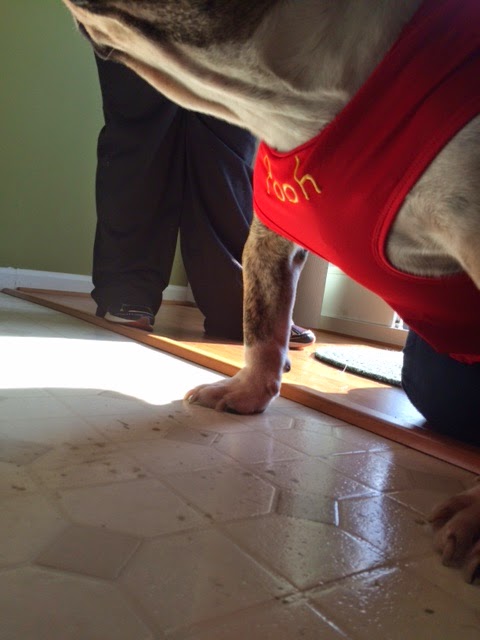 Audrey knows him as Uncle Georgie 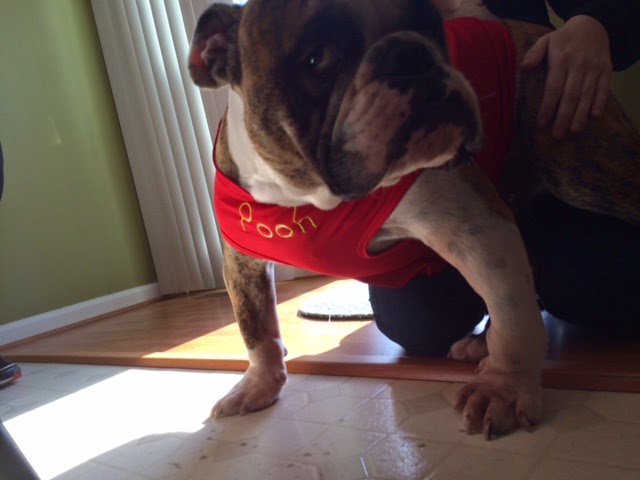 As you can see, he has a deformed front leg. He was rescued from a family that kept him in a kitchen 24/7, gave him no attention and no veterinary care. That family had gotten him from the Amish. 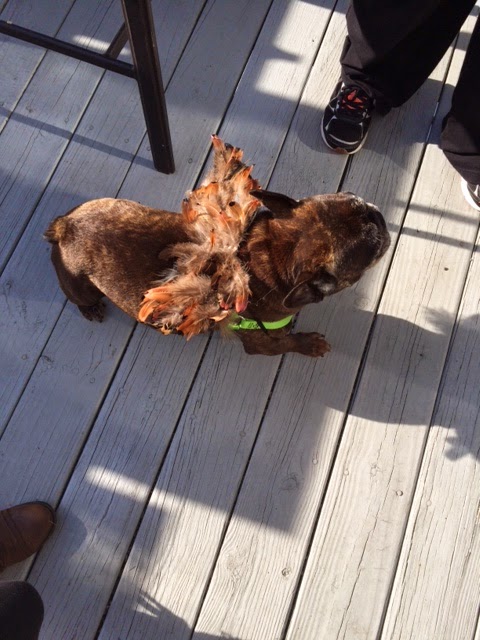 Batman the French Bulldog as Owl 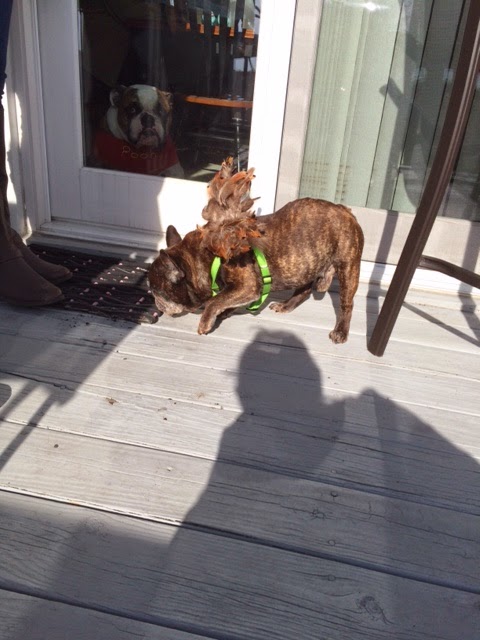 I handmade his wings 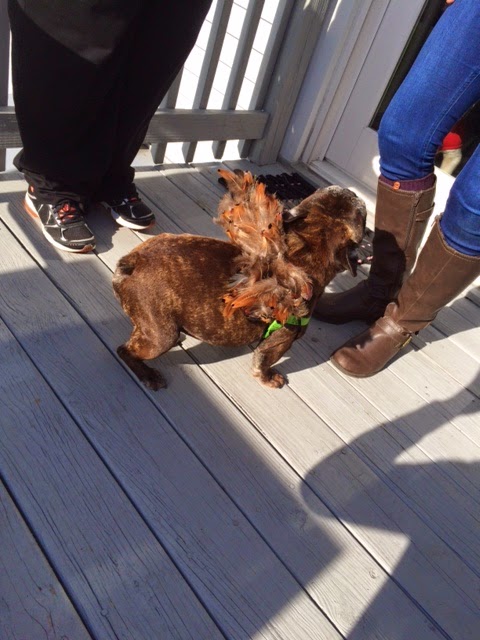 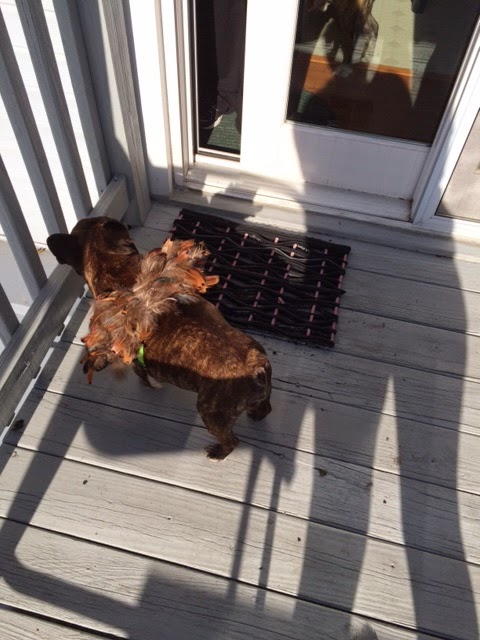 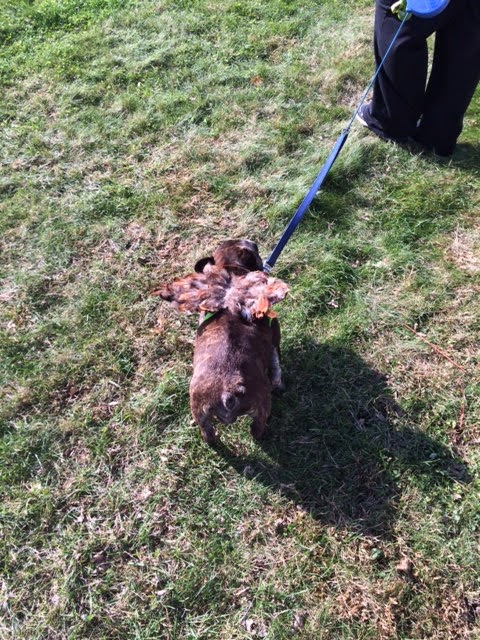 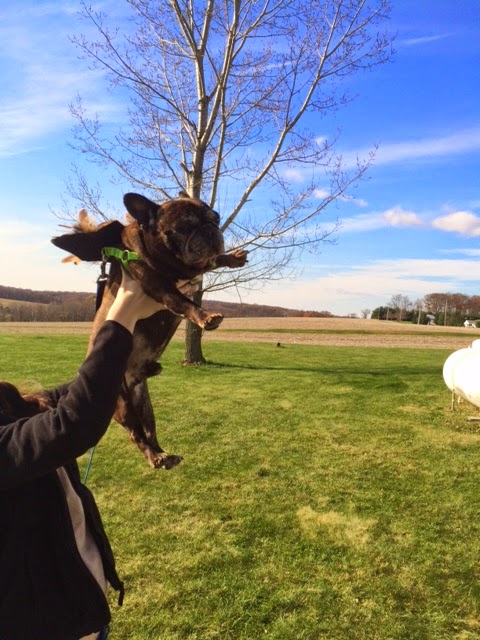 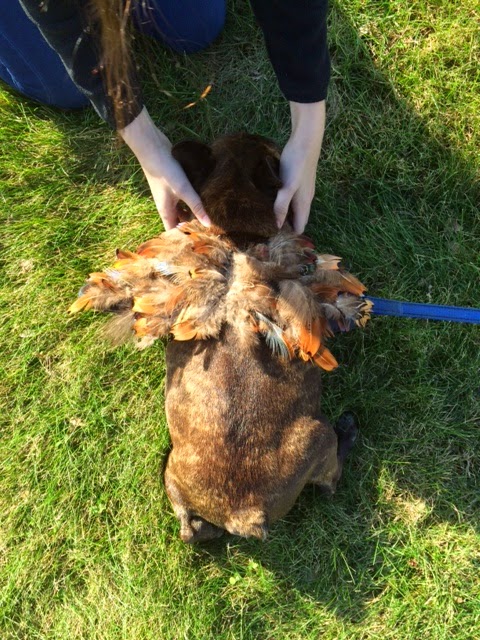 My Sister and I finally got around to taking pictures of her dogs in their costumes last night. As you can see, I did not make these but they still go with the Winnie the Pooh theme. Eleanor is wearing the exact costume Audrey wore. Our puppies are different breeds but they are the same age- Audrey (my English Bulldog puppy) is one day younger than Eleanor (my Sister's puppy). 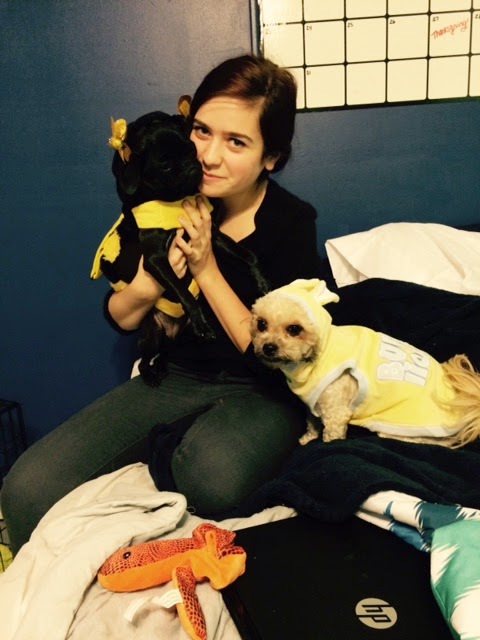 My Sister with her dogs, Eleanor and Coco Chanel 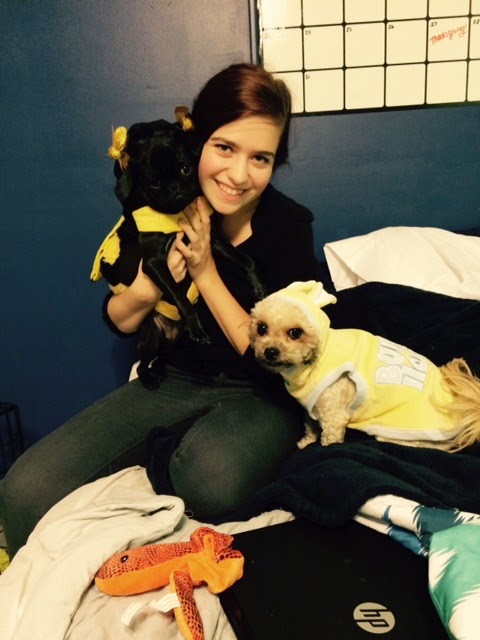 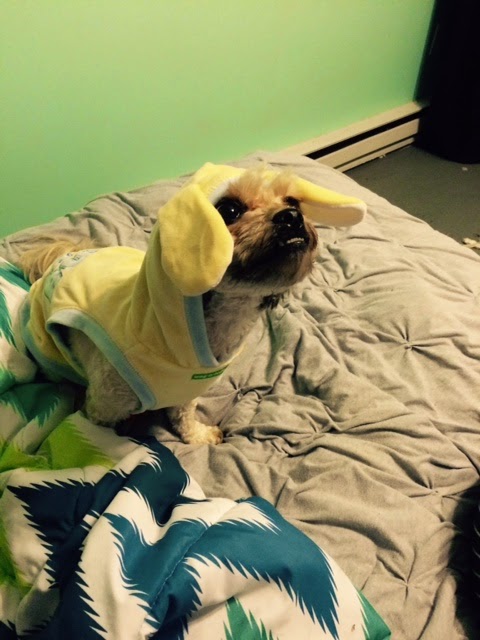 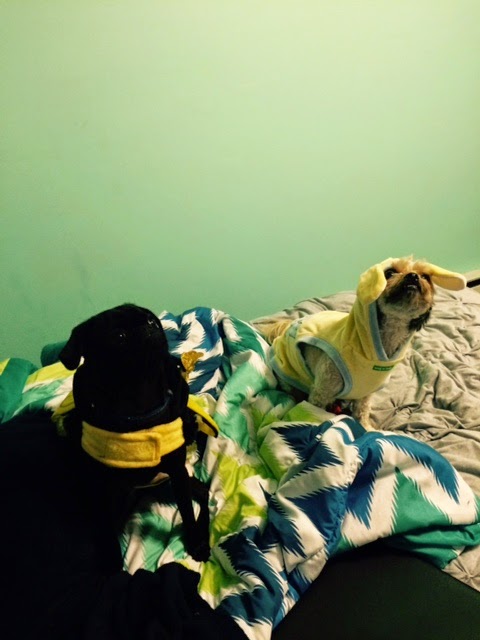 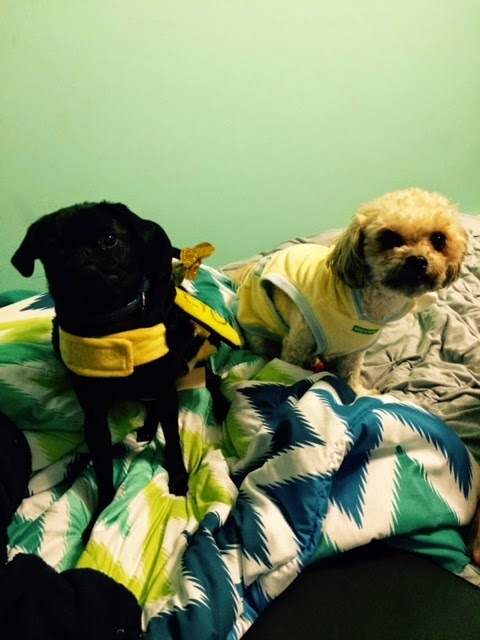 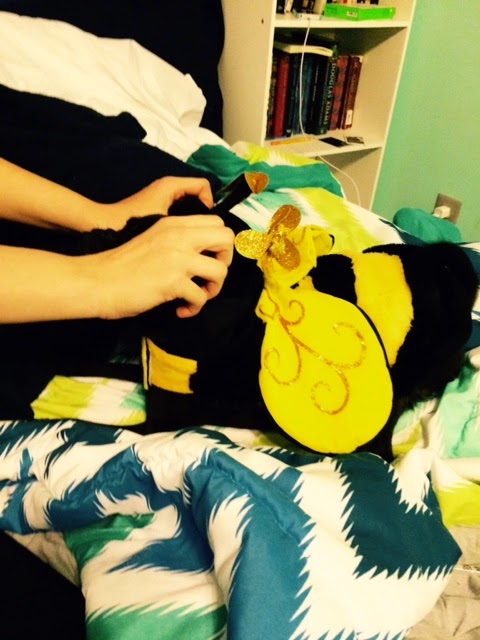 Eleanor getting her bee costume on 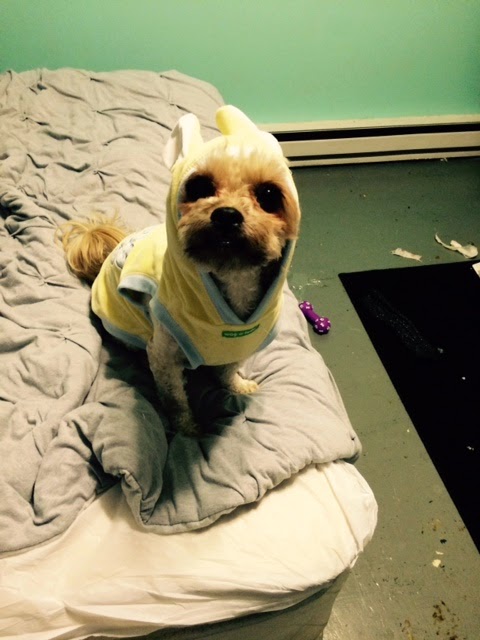 Coco's costume was actually a hoody from Petco. I came up with the Halloween costume theme a LONG time ago and when I saw this hoody online, I knew my Sister had to get it for Coco's costume 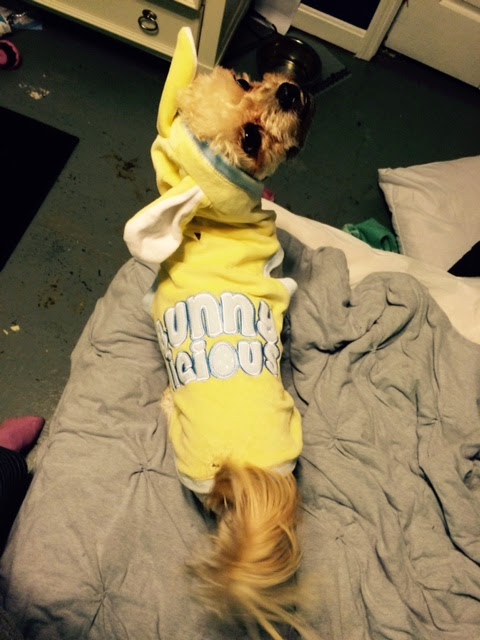 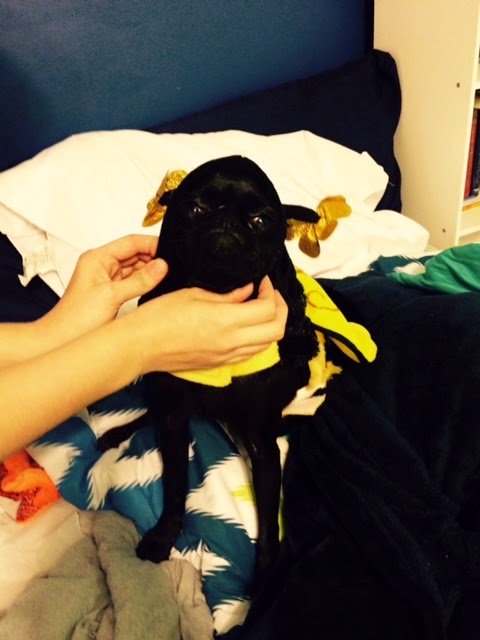 Eleanor as a bumble bee

Hope you enjoyed the pictures of:
George as Winnie the Pooh; English Bulldog
Batman as Owl; French Bulldog
Coco Chanel as Rabbit; Shichon (Shih Tzu mixed with Bichon Frise)
Eleanor as a Bumble bee; Puggle (technically she is 1/8 puggle and 7/8 pug)

If you forget what Winnie the Pooh themed characters my dogs dressed up as, you can see them here

We also decided yesterday what the costumes will be for next year. My girls: Audrey and Gemma, and my Sister's dogs: Eleanor and Coco will be Victoria's Secret Angels. They'll probably just be wearing different colored angel wings. And then my other dog, Mowgli will be Cookie Monster and my Mom's dogs will be Bert and Ernie. So it will be a double theme next year.
-Heather