December 10, 2014
Ok everyone I am going to make this short. I have been a little busy and might be posting a little less than usual- so I apologize for that. This might go on for another week or maybe not, I don't know. Works just been really sucky lately with employers not giving a shit about my health and what not. And I'm sorry but I'm going to have to neglect "WTF Wednesday" this week.

Today I took off work. I got my oil changed and went to see a new doctor about my pain, fatigue, etc. to see if he could help at all. He is actually questioning my diagnosis of Fibro and thinks I might just have a sleep disorder or something else- whatever, I hear this shit all the time. Each doctor adds something new to the list. And I can't eat after 10 p.m. tonight because I have to fast so that I can get blood tests done in the morning. Doctors and blood tests- story of my life. So we'll see what happens with that over the next few weeks.

Anyways, let's talk about yesterday. Dreamy Don re-pierced my nose, which was not a pleasant experience at all. I was nervous, just like I was the first time I got it done (somewhere else). Piercings make me nervous- tattoos not so much lol. So yea, the jewelry wouldn't go in. He thinks probably because of the scar tissue and maybe I have thick nostrils? Oh and it was bleeding like crazy. I'm so glad I decided to get that done first. But after what seemed like forever, he got it in. Hahaha that sounds so dirty. Get your mind out of the gutter Heather. I blame Don haha. 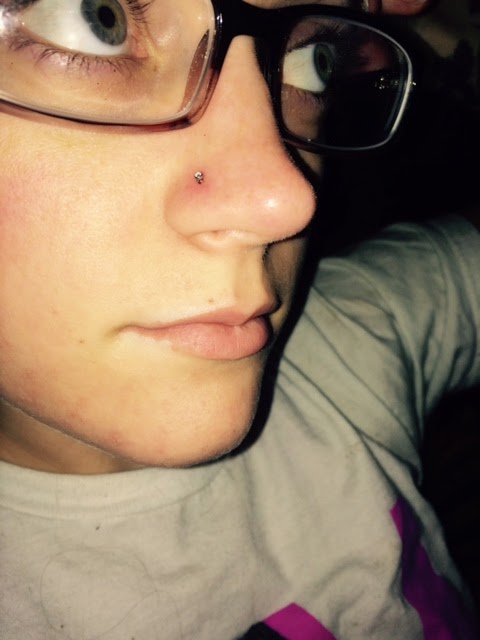 Then I got the color in my roses on my forearm touched up- I'll show you pictures of that when it's healed since it's not like a new tattoo or anything. And then finally, I got my rib tattoo. "Warrior" with an arrow underneath. The reasoning behind me getting the word "Warrior" is like a two part thing that relates to each other. I have been through so much in my life, like abuse, and have overcome so much and then dealing with my health and everything. But guess what? I'm still here. I am a Warrior. One of my health problems is Chronic Fatigue Syndrome. Some of us refer to ourselves/ each other as Spoonie Warriors- "Spoonie" from the Spoon Theory- look it up. Regardless, I have battled and overcome so much and battle shit everyday and I'm still here and strong and fighting. And then there is the arrow underneath. The meaning behind an arrow tattoo is "an arrow can only be shot by pulling it backward. So when life is dragging you back with difficulties, it mean it's going to launch you into something great. So just focus and keep aiming." I think this goes really well with the word "Warrior" and they both really relate to me. 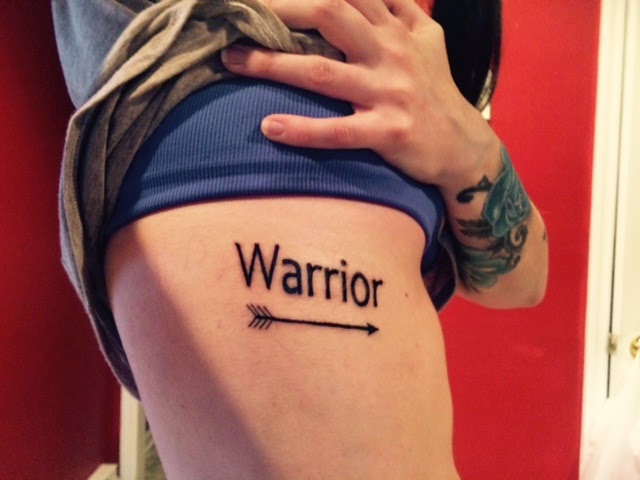