June 05, 2015
It is furrriday!!! Yes! Ugh, I was so tired this morning but then I remembered today is National Donut Day. Dunkin Donuts will give you a free donut today when you order a beverage. So I ordered a medium plain iced latte (no flavor or sugar), an egg and cheese wake up wrap, and a chocolate frosted donut. I think they gave me the donut for free but I would not be surprised if they didn't b/c a lot of the Dunkin Donuts I have been to are pretty stingy and it just so happens that on the day they are giving away a free donut, their receipt printers aren't working. Sounds a little suspicious to me but oh well. 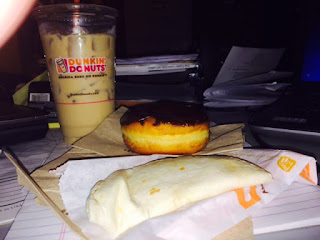 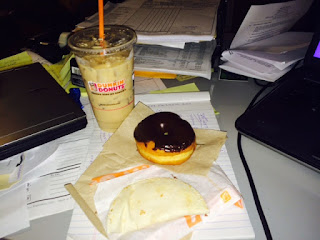 So yesterday after work, I had a Doctor's appointment to receive my results from the Multiple Sleep Latency Test. I do not have Narcolepsy. At first I was disappointed because I wanted answers, but now I am relieved because if I had been diagnosed with Narcolepsy, it gets difficult with PennDot and driving. I think they have to take your driver's license away and can only give it back when you haven't had any black outs for a certain amount of months. I am very independent and although my sister lives with me right now, I can't depend on her to always drive me to run errands and she's going off to college soon, so then I will be living alone. And I drive an hour and 15 minutes to work. So I kind of need to drive and I really don't like being dependent on people anyways.

The only thing he can think of right now that is causing blackouts is from when I don't get good sleep a few nights in a row from when I am in a lot of pain, my anxiety attacks, exhaustion, and stress. So there isn't much more that he can do but I have to continue being on a set schedule going to sleep at the same time and waking up at the same time as much as possible. I've been trying to do this for the past few months and on a night that I have work the next morning, if I go to bed even 30 minutes- an hour later than normal, there is a HUGE difference in the morning with me being even more tired. So that's the health update for now. I go to my Psychiatrist next Thursday.

And now onto dog nail clippers. Anyone who knows me knows that I hate clipping dog's nails. I just suck at it. But I have to do it because the vets won't clip Gemma's nails because her quick is pretty much at the edge of her nails due to her previous owners not clipping them and she doesn't like the grinder. So I have been trying to clip even the tiniest bit of her nail(s) everyday in order to try to get the quick to recede. I used to take Tigger to Petsmart for his nails but stopped because they would put him in a headlock/ choke-hold whenever they did his back nails. He has bad hips and so when he is in pain, he just does not like getting the back ones done. I do not approve of putting a dog in a headlock, especially when reports have been coming up that dogs are dying from Petsmart doing this because they aren't getting oxygen, etc. This is especially dangerous with bulldogs and pugs who just so happen to be the breeds of dogs I have read about dying at Petsmart while they are getting their nails clipped. And then there's Audrey. The last time I took Tigger to Petsmart to get his nails done before I decided to never go there again, Audrey left Petsmart with nails that looked like they had hardly even been clipped. So I just saw that as a waste of money and didn't want to risk her getting put in headlocks either. She is so difficult with nail clipping but I now clip all of my dogs' nails.

After they come inside after their last potty break of the night, I clip at least one nail on each of the dogs and give them a treat after. Gemma's and Tigger's nails are extremely hard and thick. One day after doing Gemma's nails, I started doing Tigger's and the nail clippers broke. I had been struggling to find a good cheap pair of guillotine nail clippers. I prefer this style because it is quicker, easier, less stressful, and gives a cleaner cut. 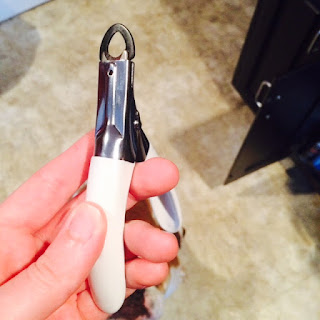 I finally decided on this small pair from www.dog.com that are by Millers Forge and are only $5.99 (regular price). I LOVE them. They are really sharp and even come with a replacement blade for when the first blade goes dull. They are very lightweight and I got 4 nails clipped on each dog in 5 minutes or less (I'm thinking less but Audrey always takes the longest b/c she's a difficult brat). I've only used them once so far and already feel way more confident when clipping my dog's nails. Success! 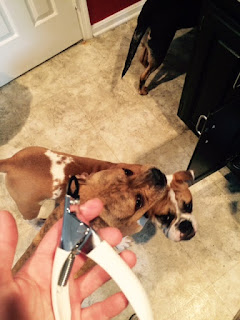 Have a great weekend!
-Heather