June 16, 2015
How the heck is it only Tuesday??? Ugh, these weeks seem like they are getting longer and longer.

So my sweet baby Audrey is officially on seizure medication. She has been having seizures. The first one I knew about was the Friday before last and when she had one last Monday, I called the vet and took her in. She took some blood and sent it off to the lab, which all came back normal- thank God. But she said that she is probably having seizures because of her anxiety, which totally makes sense because Audrey has been a big scaredy cat from day 1. Like big time to the extreme. But my poor little girl who isn't even 1 year and 3 months old yet had a really bad seizure yesterday, or at least bad compared to the two she had before. This time she could only move her back legs. She couldn't use her front legs at all and when she was finally able to roll over, she couldn't get up and then when she finally managed to get up and put her front legs on my shoulders to hold her up, she started having a seizure again and fell back to the ground shaking. It is so scary and sad. You can tell she is so scared and just stares at me the entire time as I gently pet her and calmly tell her it's ok while we wait for the seizure to pass. 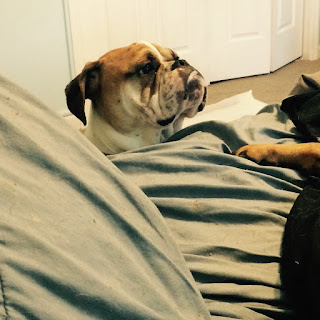 This picture is from Sunday. She took some stuffing out of a toy and so I took the toy away from her. She walked around with this little piece of stuffing sticking out of her mouth for about an hour (I'm probably over exaggerating. It was probably only a few minutes or so) and I really don't think she knew it was even there. It was so cute but then I opened her mouth and took it from her for safety reasons. 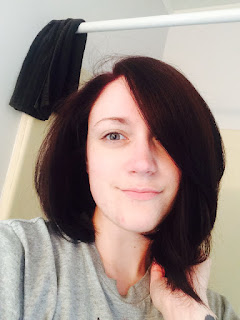 And last night I dyed my hair burgundy again. It is so difficult to get a picture that captures the color correctly. So this was the best that I got.

Is it Friday yet? Nope. *sigh*