June 10, 2015
Sooo I'm not entirely sure which day it is. I usually make calendars each year with the pet-related days, weeks, and months but this year I just didn't. I looked at 3 different sites I have used in the past and one says it was yesterday, two say it is the 14th, and a picture I saw and shared on Facebook yesterday said it is today, the 10th. So whichever day it is, I'm going to cover it today.

I have had dogs my entire life. From the chocolate lab puppy that my dad told us to go get when I was 2 and my mother and I both had the chicken pox (I had dogs before the chocolate lab puppy but I felt like he was my true first dog) to the 3 I have now. But the one I want to discuss today is Magdalena Starr. She had to be put down April 11, 2014.

Magdalena Starr, a.k.a Magz, a.k.a Maggie, was my first Bullmastiff. It all started when we (he was really my mom's) got our first Bullmastiff, Sammy the Bull. So about 11 months after we had gotten Sammy the Bull, the breeder had a litter of puppies. Side note: Sammy was from a litter of 15 and Maggie was from a litter of 13 or maybe it was the other way around- either way, that's a lot. I would come over and help and let the breeder have a break. It was tough but rewarding work. I knew that they wouldn't give me a puppy for helping, but you never know. I had my eyes on a red brindle female. I hinted to the breeder that she was my favorite and she told me that was the one she was keeping. I was a little sad but again, I knew they weren't going to give me a puppy. As time went on with helping take care of the puppies (I got to give them all their first baths!), whenever I would lay down or go to leave, one particular puppy would cry. So if the others were sleeping and I was laying down and she would cry, I would take her out of the whelping pen and lay her beside me.

The breeder quickly noticed this pattern and told me she couldn't let this puppy go to anyone else. Now I know what you're all thinking, I got a free puppy. Nope. We had to pay for her- by the way, Bullmastiffs are expensive. The thing is, this breeder (who is now retired) was VERY well known. Everyone who wants a puppy from them had to be put on a waiting list because so many people wanted their puppies. So my reward/ privilege was that I got to pass the people who were next on the waiting list and get this puppy. This beautiful big pawed thick black brindle female Bullmastiff puppy. She was absolutely gorgeous and big for a female. 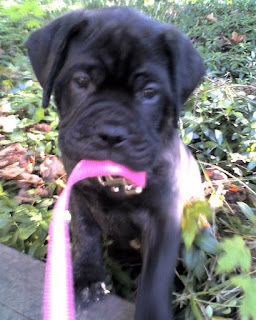 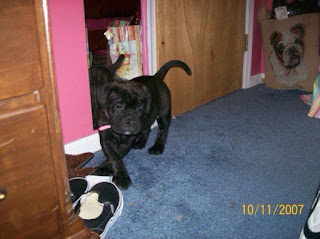 She was like my first baby. I completely adored her. I would love walking her in public because when people would make rude comments telling their children or dogs to stay away from that big mean dog just because of the fact that she was huge, I would stop and put my hand and part of my forearm in her mouth and she would just sit there and not close her mouth on my hand. Their jaws would drop and I would laugh. 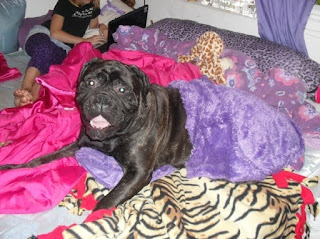 At a young age, Magdalena was diagnosed with Lymes disease and then Canine Lupus. She was on lots of medication and went to the vet a lot. And then, she was diagnosed with Lymphoma. I was crushed. They put her on Prednisone, I believe that is what it was called because there was no way her body could of handled chemo. At first, she started acting like a puppy again. She had lost a lot of weight and looked like she was the size of an 8 month old Bullmastiff puppy (she was almost 7). It was really sad but at the same time I was happy that she wasn't in pain and had gotten her energy back. But that only lasted a short time and then her health was deteriorating again.

She was in pain and you could just tell that it was her time to go and that she was ready. So we put her down. I am not going to make/ allow a dog to suffer just because I don't want to put her down. I have, had, and will always have my dogs' best interest at heart and do what is right for them. 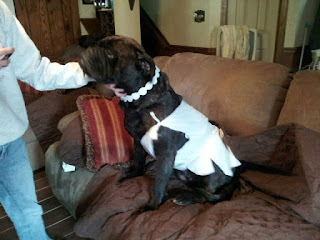 This was her last Halloween. I made her Wilma Flintstone costume.

When we arrived at the vet, it hadn't really hit me yet and I wasn't sure if I was even going to get emotional at that point because sometimes my medications put me in "zombie mode" and block my emotions out. But randomly, as we were waiting for the vet to come in and take my sweet girl out of her pain and misery, it hit me. I fell to the floor, wrapped my arms around my big baby and bawled. I kept telling her how sorry I was and that she would be in a better place and not in pain. When the vet came in and as they started the process, I just layed with her, her head in my lap, petting her head and telling her how much I loved her and that she is going to be so happy and to go play with Sammy the Bull and Ozzy (our English Bulldog who had passed away from Lymphoma before Sammy the Bull passed away). And then it was over. They allowed us to stay for as long as we needed after it was all over. We probably stayed there for an hour at least. I didn't want to leave her and my mom also wanted to make sure that she actually was 100% put to sleep. I bawled my eyes out and just hugged her that whole entire time. I was extremely loud bawling my eyes out. I'm sure everyone in the entire vet building could hear me but I didn't care. And then I finally let her go. God I'm trying not to cry as I am typing this right now but it is getting really hard to fight back the tears. We had her cremated with her favorite toy. We had her toy in her arms as she was being put to sleep and we requested that they cremate her with her toy. So she took her favorite toy with her to cross over the rainbow bridge and into Heaven. That girl will always hold an extremely special place in my heart. I love you Magdalena Starr. 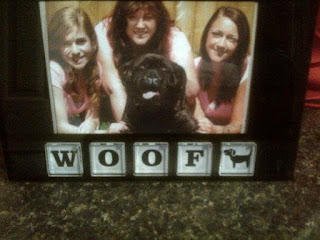