November 30, 2015
Ugh, I am pretty sure I am not the only one who considered taking off of work today. I woke up with a massive migraine and my body just hurts all over. But I sucked it up and went to work. Is it bad that I am already trying to keep my head up by reminding myself it is less than one month until we are off for Christmas?

So on Thanksgiving I went to Jesse's Aunt's house. I had a really great time and thankfully, the dessert I had made turned out amazing. I took a recipe for Pumpkin Crumble Bars off of Pinterest, surprise surprise, to take there and decided not to make them until the morning of. Even though I woke up at about 6:00 a.m. and we didn't leave until 1ish, I just barely had enough time to make them. After you bake the bars, they have to cool down and then be refrigerated for at least 4 hours. Thankfully Jesse helped me a little bit which made it so much easier on me. Baking desserts with a pumpkin type filling can be tricky sometimes because it can be difficult to tell if it is actually baked all the way and then you usually have to let it cool and refrigerate for hours afterwards. Almost the entire time we were at Jesse's Aunt's house leading up to dessert, I was so freakin' nervous and just constantly thinking about whether or not the dessert was actual done. But I breathed a huge sigh of relief when I picked up the first slice after seeing that it came out pretty much perfectly. And I was pretty darn excited when I saw that everyone had eaten so much food that they hardly touched anyone's desserts because that meant we got to take home the rest of my pumpkin crumble bars. They are sooo good and I highly recommend them. 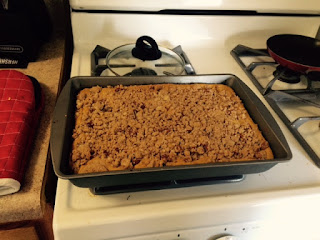 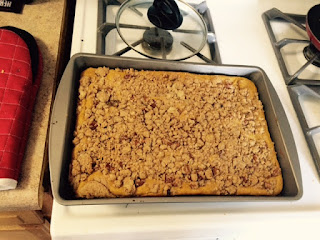 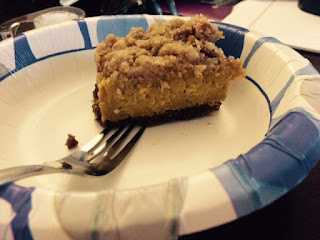 And on Black Friday Jesse had originally requested that we literally do nothing and go nowhere. He just wanted to relax and sleep. Welll that didn't happen. We just have not been able to sleep in past 6 or 7 (but that is kind of sleeping in when you get up at 3 a.m. during the week). We did end up going out but only to run just a few errands- not Black Friday shopping related- and then I did minimal Black Friday shopping online. As of right this second, the only online shopping I did this weekend was for Christmas presents, panties from Aerie because they were 10 for $32 and I think it is impossible for a girl to have too much underwear, and a throw for the living room. I'm pretty sure that's it- I think.

On Saturday we went to my mom's since we didn't see her on Thanksgiving. We brought little wiggle butt Audrey so that she could play with her Bulldog family members, Gretta and George. And then one of my uncles and aunts, my grandmother, and 2 of my cousin's kids ended up coming over around the same time as Jesse, Audrey, and I. So Jesse got to meet them. We all had a really great time and Jesse and my uncle got along great. He even invited Jesse to come down to my grandmothers the day after Christmas to go hunting. So it looks like I am actually going to my grandmothers this year in Virginia around Christmas, which I have not done in a long time. It will only be for the day and I am still working out details with the dogs but yup, looks like I'm going to Virginia that Saturday. I am so happy that he's getting along with my family and I am getting along with his. No family drama please. 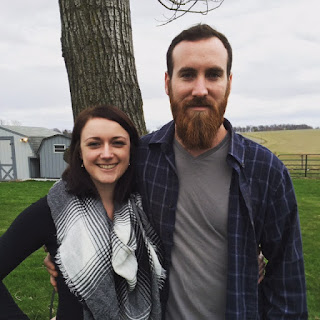 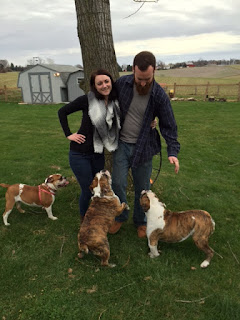 Audrey, Gretta, and George being typical English Bulldogs trying to hog the spotlight. 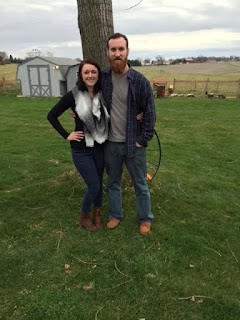 And we got the living room painted Sunday! I still need to put a fresh coat of paint on the trim but at least the walls are painted. I am not 100% thrilled with the color and this color is also going to be the color of the hallway and the kitchen. I wanted a light neutral grey/ greige. It looked similar to what I wanted when the paint went on the wall. However, when it dried, it ended up being a silvery type grey/ grey with blue undertones. It's a pretty shade, don't get me wrong, but it isn't want I had wanted and envisioned for this room (and the hallway and kitchen). But it isn't horrible and I refuse to repaint it or get Jesse to repaint it, so I will just have to deal. Plus, I'm sure I won't even notice it that much once I get shelving and some decor up. I do love that it is starting to look like a home though and the paint is definitely helping with that.

Well, I hope everyone has a great week and just remember, Christmas will be here in less than a month.