December 14, 2015
This weekend was fun but so tiring. I even fell asleep around 7/ 7:30 p.m. on Saturday night! Of course I still didn't wake up feeling rested but I have been so tired lately. I could not keep my eyes open for the whole movie we watched (Minions). It was ok. I really liked certain parts and others were just meh, but I do love me some little yellow minions! Alright, lets pump the breaks here and back up to Friday.

Friday, after work, Jesse and I took Audrey and Tigger to the vet. I was convinced Tigger had a UTI and I figured if I was bringing him into the vet, I might as well check Audrey because she isn't fully house trained and I just wanted to get her checked. Well, they don't think anything is wrong down there with Audrey but couldn't really check because miss stubborn bulldog pants refused to pee at the vets to give them a sample. And we still don't know what is wrong with Tigger. He even peed in the vet's office in front of the tech and he didn't even realize he had peed. He was completely oblivious. But at least he peed so that they could take the sample off of the floor, although his pee was extremely pale. They did an exam, a urinalysis, catheter, x-rays, and blood work. Exam was fine, everything on the urinalysis came back fine except for the pee being pale, catheter went in normally, and the x-rays showed no bladder stones or anything unusual. Not all bladder stones can be seen on an x-ray but the vet doesn't think he has them because of no resistance with the catheter going in. The blood work was mainly done to check his kidneys. In the mean time and in case the blood work is normal, they gave us Proin Chewable Tablets. They are given to control urinary incontinence due to urethral sphincter hypotonus in dogs. So I'm just hoping these are working/ continue working *Knock on Wood*. I got the results back on his blood work today and that is all good, thank God.

After the vet ordeal, we went out to Smokey Bones (for the first time) for dinner and drinks with our friends. The drinks and food weren't bad but I definitely wasn't exactly happy at the end of the night with the service. The host, waitress/ server, and bartenders were all very weird. They were giving all 4 of us nasty looks. They were even giving me and Jesse weird looks before our friends arrived. Right before we were going to get the bill, they told us we were cut off. Like no more drinks. We didn't get shit faced drunk, we were not rude, we were not loud, and we didn't even drink that much. Yes, most of the time Jesse was the one who walked 2 feet from our table to the bar to get us our drinks but if they thought all of those were his and that he could possibly drink that many drinks in the short amount of time we were there, than they are even more incompetent than I thought. And anytime we ordered a single shot, they gave us a double. I can be loud even when I'm not drunk and none of us were even being loud or anything. It was just so bizarre. What I also kind of thought was weird was that there was only a 10 minute wait on a Friday night. That just seemed really short to me. But it is what it is.

On Saturday- ya know, before I fell asleep watching Minions- we did minimal stuff around the house and ran errands. We spent a lot of time getting the remainder of the Christmas presents (except 1 left). I really do enjoy giving people presents and cannot wait! And it looks like I'll be on Christmas present wrapping duty while Jesse is at work next Saturday. We also tried making something I saw on one of those short Facebook recipe videos that are super short without sound, instructions, or anything. We tried making tater tot grilled cheese with bacon and jalapenos in the waffle iron. Yea, that didn't work. I mean, we made them but they were a little much and extremely messy to make and weren't like the video- go figure. Oh well.

Besides laundry and a few things around the house, we went to my mom's house on Sunday. Her 6 month old alpaca, Bella, and her little miniature donkey, Sophia, arrived at her house. So Jesse and I really wanted to go meet them, plus Jesse likes hanging out with my mom and step dad. And I wanted to see how Audrey would react to a miniature donkey (not in the same area- dogs are not allowed in the separate area where the alpacas and donkey are). We had pizza and baked macaroni and cheese and had a really great time. Oh yea, and no one told me my sister came home on Friday. So it was a surprise to be greeted by her at the door when we got there. 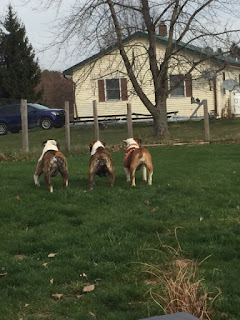 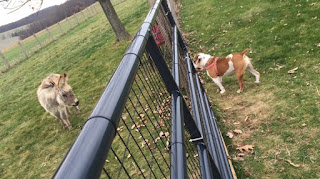 Audrey didn't even realize there was a miniature donkey until we had been there for 30 minutes- a hour. The dogs like to sprint towards the donkey and watch her and the alpacas. 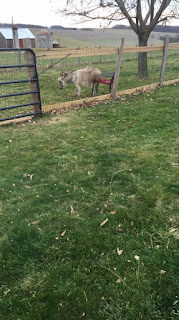 Sophia sitting in the lawn chairs. 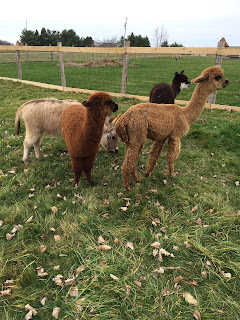 Bella is the little chestnut one in the front. 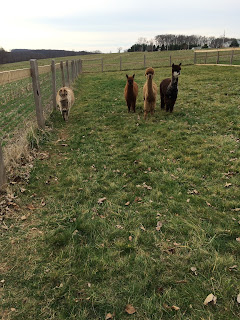 The whole pack, Sophia, Bella, Homer, and Bufford. They get along so great and are always standing by each other. They might even get Sophia a little miniature donkey friend to play with since she plays a lot rougher than the alpacas. 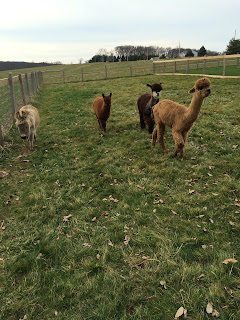 Sophia is off to the side because she was a little frustrated with us. She thought we were going to put her halter on since we had put one on Bella for a minute but we didn't put Sophia's on. They both are not used to halters yet, so it will be a slow process. 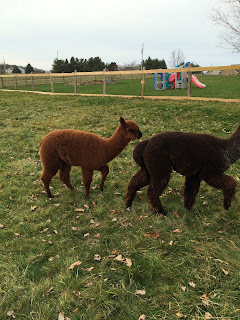 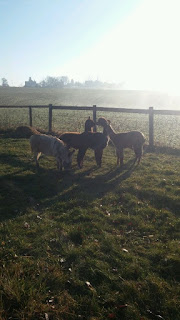 This last picture is one that my mom sent me of Homer reaching over Bufford to kiss Bella. How cute?!


Hope y'all had a great weekend! Only 11 days until Christmas!