February 14, 2017
Hey y'all, I'm baaack! I've been busy being a mom and having issues with crappy Comcast internet. So I'm trying to get this post done while I sit in Starbucks before I pick up Rory from her second day of school (daycare)!

On 12/19/16 and 12/20/16, I was experiencing what I thought were actual contractions (and they were) and had my last prenatal appointment on the 20th. The midwife I saw said that what I was describing were braxton hicks. I had been having braxton hicks prior and these were much different. It was like strong menstrual cramps in my lower abdomen. On 12/21/16, they were getting stronger and more frequent while I was at work but they weren't bad and I was in denial that they were actual contractions.

I decided to grab some Chipotle after work and after eating a delicious burrito bowl, I figured I should probably start addressing the wedding invitations and stop procrastinating. Well, midway through, the contractions were getting stronger and I felt like I needed to lay down or that I should lay down. So I did. Shortly after, Jesse came home from work a little early. Anytime I had felt braxton hicks or real contractions, I would avoid telling him b/c he would freak out but I decided to tell him this time and he of course freaked out. He started timing them. I was still completely in denial. After timing them for like 15-20 min., he said they were all 5 min apart. I was still in denial and downloaded a contraction tracking app which was definitely screwed up in terms of timing but helped my denial of being in labor. So I decided to lay down on my left side in a hot bath b/c I read that could stop or slow down contractions. I stayed in the bath until it got cold and then Jesse made me get out. The first two contractions after the bath were about 8-10 minutes apart but then the ones after that were all 5 min. apart. I told Jesse the doctor scheduled to do my c-section said not to come in until they were 5 min. apart for 1 1/2 hours. We live 30-40 min. from the hospital, so I figured if they continued to the hour mark, we would pack and go. And it of course went onto the hour mark. So we finished packing last minute things in the hospital bags, I took a quick body shower, took out my nose ring, got the dogs ready in their room, and we headed to the hospital.

When I got there, the pain still wasn't that bad and they hooked me up to the non-stress test machine. It showed that I was definitely having contractions 5 min. apart and so they checked my cervix. I was already 1 cm dilated and 100% effaced. They said they really don't like doing c-sections early (insert eye roll. they just confirmed I was in labor but didn't want to do a c-section- bullshit) and asked if I wanted to try delivering vaginally. I told them I couldn't because of my health (of course they weren't happy with my answer but I wouldn't let them pressure me). So they said they would come back and check me in an hour and if I had progressed, they would get me prepped for my c-section. About 30-45 min. later the contractions started getting really painful. At the hour mark, Jesse looked for the nurse since she hadn't come back to check me. They kept saying she was on her way or that she was held up doing paperwork. I was in so much pain and then Jesse freaked me out when he said I was bleeding. Guys, don't ever tell a woman in labor this unless she is really really bleeding b/c I thought I was hemorrhaging. A nurse came in and said it was normal and just my bloody show. I asked Jesse to take a pic and show me and it was my bloody show and only a tad bit of blood. After it had been like 2 hours, the ER doctor came in to check my cervix (that nurse never came back by the way). I was 3 cm dilated and still 100% effaced, so it was confirmed I'd be having a baby that night. He (and other nurses) asked my about 100 times if I wanted to try vaginally and kept trying to talk me out of a c-section but I held my ground. They finally said ok and said the anesthesiologist would come in to talk to me. Well then an emergency c-section came in, so I had to wait.

And then finally it was my turn. They prepped me and got Jesse changed into scrubs. They put in the spinal block (they hit my bone the first time and it really hurt). And then they did the other stuff like putting a catheter in me, etc. I was numb from the waist down and I was shaking (normal). I will say feeling them pull my daughter out of me was the most amazing magical feeling. You only feel tugging but I could feel it right where she was and I really enjoyed it.

Rory Brielle McAward was born into this world 10 days early on 12/21/16 (the first day of winter!) at 11:38 p.m. and weighed 8 lbs 8 oz. (So yea, the high risk specialist was correct about me having a big girl- she was even too big for the special coming home outfit I had got her). We are so in love with her, it is insane. 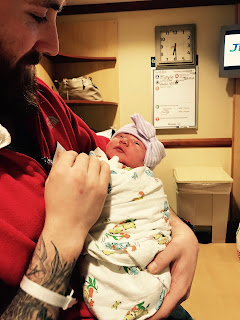 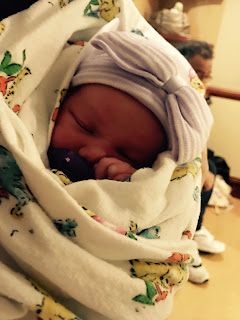 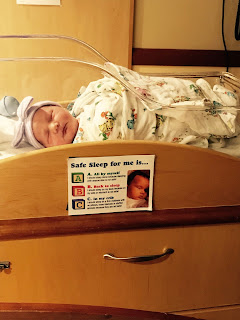 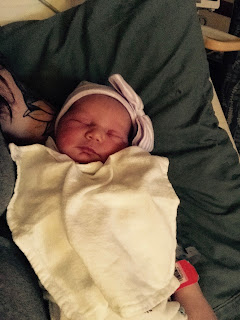 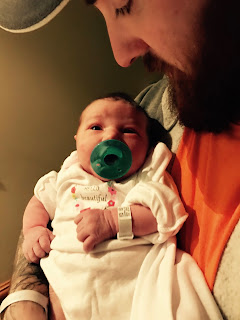