January 25, 2018
Sooo you might have read/ heard that we changed baby #2's name and if not, then you're finding out right now. Yup, that's right, we changed her name from Violet Jameson to Rhylan Violet. My mom already had an elf made with the name Violet on it and my pregnancy stat chart canvas for my baby sprinkle with the name Violet on it and we still changed it.

I am one of those women who strongly urges expecting parents to ignore others' negative comments about their soon-to-be child's name. We had baby #2's name (if it was a girl) picked out and announced before we even started trying. No one had any issue with the name. Once we found out we were having another girl and officially announced her name, people had issues. I was hurt and furious, especially b/c some of the comments had come on the day we found out we were having another girl. My cloud 9 feeling quickly went south. Ever since then, I had started feeling doubts about the name. I love the name, don't get me wrong, but that is when the feeling of doubt started rolling in.

I tried to ignore the doubt and continue on but it was still there. Then someone on my pregnancy app announced what she was naming her daughter and I fell in love with the name... Reese Everleigh (they were spelling it different but that is how I would've spelled it). Jesse hated both the name Reese and the name Everleigh. So I accepted his opinion and kept telling myself baby #2 would be named Violet Jameson. But the name Reese would constantly pop into my head and wouldn't leave me alone! I couldn't hold it in and would ask Jesse if he was sure he hated the name... and he was and he did.

Then one morning on my drive to drop Rory off at school and go to work in the snow, the name Rhylan popped back in my head. This name had originally been on our list of names. I kept saying it to myself, pairing it with various middle names, and really started loving it again. And with the name Rhylan, Jesse would be able to call her Riley. It was perfect but I needed to discuss it with Jesse first and what would I do about already having stuff with the name Violet on it?

When I got to work, I 1. looked up the Irish meaning of the name Rhylan (island meadow) and 2. texted my mom, my younger sister, and one of my cousins about the name since Jesse was asleep (night work). They liked the name but loved the name Violet and thought I should just keep it the way it was. The mixed emotions and thoughts I was feeling took over my mind and I was driving myself (and everyone else) CRAZY. I couldn't stop thinking about what to do and needed confirmation and a decision made that day to put myself out of this state of confusion, anxiousness, crazyness, and doubt. I thought of middle name pairings and told my mom, younger sister and cousin. Then I also reached out to the people on my pregnancy app. I was so excited to get feedback and some confirmation. I decided I was going to call Jesse and ask what he thought of the name Rhylan Violet McAward. That way, using Violet as her middle name, it wouldn't be totally bizarre for her to have some stuff with the name Violet on it. I was so excited to hear his reaction-I couldn't wait and thought he would be so happy. Do you really think a man who is asleep, tired, and sick of hearing his wife throw out names when a name has already been chosen is going to be excited about be woken up by a phone call from his wife throwing out yet another name? If you said "Nope", then you were right. But I called him and pestered him anyway. Even though I didn't get the reaction I thought I would, we decided to change her name.

I sent out a text to family notifying them of the name change and the response was just blah. No excitement or anything. When I announced it on social media, again, no real true excitement. Just mixed responses and some negativity. If they didn't want us to change her name, then they shouldn't have been so negative about the original name in the first place!!! I truly couldn't believe I was letting this affect me. Me, the woman who constantly tells others to name your child what you want to and to not listen to what others say, was letting other people's opinions affect her.

That weekend, I exchanged the wooden letters that spelled Violet at A.C. Moore for wooden letters than spelled Rhylan, made her nursery decor, and hung it up. And Rhylan Violet McAward was going to be her name no matter what. It was set in stone- or on the nursery walls.

I still slip up sometimes and refer to Rhylan as Violet but I am very happy with the name change. I think the name Rhylan goes perfect with our little family. Rory and Rhylan, our two little sassy Irish princesses. Riley Bear, I cannot wait for you to be here... but please, wait until we have your nursery finished and come when you're fully cooked!

And that is that. Her name is changed. 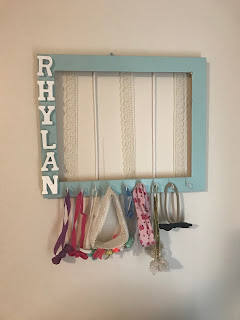